Cochrane goes to the March for Science 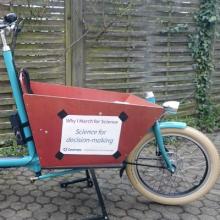 The March for Science took place on Saturday, 22 April 2017 - also known as Earth Day, a commemoration of environmental advocacy and science in the public interest established in the United States nearly 50 years ago. The March took place in more than 600 cities around the world, to champion the science that upholds the common good.

Cochrane contributors participated in marches worldwide and are sharing photos with us and on the #sciencemarch and #MarchforScience hashtags on social media. If you’ve got photos or stories to share, please post them to the Cochrane Facebook Group, tag @cochranecollab on Twitter, or send them to the Communications and External Affairs team.

Cochrane CEO Mark Wilson quoted in coverage of the London March in the Guardian.