Announcing the prize winners of the 2018 CitSciMed Blitz

Cochrane Crowd joined forces with two other Citizen Science platforms, Mark2Cure and Stall Catchers, for CitSciMed Blitz. Read on to hear how the blitz led to some “firsts” for Cochrane Crowd, and for prize winner announcements.

Anna Noel-Storr from Cochrane Crowd met Ginger (Mark2Cure) and Pietro (Stall Catchers) at the CitSci2017 conference in St Paul, and they’ve been keen supporters of each other’s platforms ever since. Readers will remember Cochrane Crowd and Mark2Cure joined forces for last year’s MedLit Blitz. When it came time for this year’s blitz, the three platforms collaborated for the first time. Each platform ran a 24-hour challenge within a one-week period, with contributors encouraged to participate in all three challenges.

One of the beauties of a collaborative blitz lies in members of each platform being introduced to the other platforms. Seeing regulars from Mark2Cure and StallCatchers pop up on the Cochrane Crowd leaderboard was exciting, and seeing Anna appear on the Stall Catcher leader board, albeit briefly, was also quite a thrill! 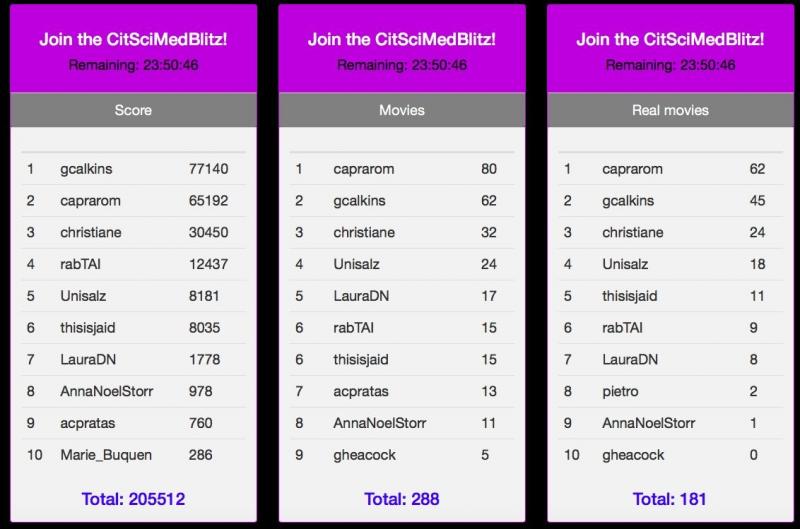 This blitz was also a first for Crowd in a technical sense. It was the first challenge event Crowd has run using the Cochrane Classmate interface. This meant Anna and Emily from Crowd could communicate directly with participants throughout the challenge, adding an element of live feedback that hasn’t been possible before.

Without further ado, let’s look at the prize winners!

The overall winner of CitSciMed Blitz, with the highest ranking across the three platforms, was Michael Landau. The grand CitSciMed Blitz trophy is being custom made for Michael and will be sent to him shortly.

The top ranked contributor for each platform will also receive a CitSciMed Blitz trophy.

Congratulations to all prize winners!

Cochrane Crowd extends a huge thank you to all the Citizen Scientists who took part in CitSciMed Blitz, and a special welcome to those who contributed to health evidence through Cochrane Crowd for the first time. Thanks also to Pietro and Egle from Stall Catchers and Ginger from Mark2Cure for their great company and adventurous spirits.

The team at Cochrane Crowd plan to run annual collaborative blitzes with Mark2Cure and Stall Catchers, and plans are afoot to make them bigger and even better. The next one will coincide with Citizen Science Day 2019.

You can read CitSciMed Blitz wrap ups from Mark2Cure and Stall Catchers, here and here.