Building an effective and sustainable organization through the Strategy to 2020 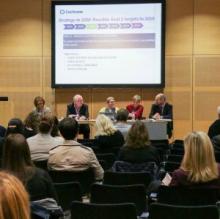 It was a pleasure to see and work with many of you at the mid-year business meetings in London from 4-5 April, which were followed by three days of Cochrane Steering Group (CSG) meetings. My impression is that we will look back on those meetings in London as some of the most significant in Cochrane’s history, when the organization’s leaders made critically important decisions on how we work together and are structured as an international network of Groups; and how we oversee and govern our affairs.

Strategy to 2020 aims to put Cochrane evidence at the heart of health decision-making all over the world. To achieve this we need to do two things: first, make it simpler, quicker, and more efficient to produce high-quality Cochrane Reviews. Second, increase the number of people worldwide accessing and using Cochrane evidence in their decision-making. We have already taken significant steps along this road, making substantial investments in improving the technology author teams use to produce reviews via initiatives such as Project Transform and the Cochrane Author Support Tool. We have launched an integrated quality strategy comprising prioritization, quality management and assurance, quality improvement, editorial and methods policy development, and maintenance. We are working with Wiley, our publisher, to deliver an enhanced Cochrane Library in early 2017 that is built around the priorities identified through user research. We are expanding our training and translation activities worldwide. And we are forming partnerships with organizations that can help us deliver and disseminate our work.

But alongside all of that progress, the CSG has recognized that in order for us to achieve our strategic goals, Cochrane needs to change its structure and ways of working in a more fundamental way than it has ever attempted before. We are still organized along the design developed by the original founders of the collaboration whilst we are working now in a very different world. Groups are under increasing pressure to maintain their funding from governments, research institutions, and other non-commercial sources in a climate of decreasing investment in research where donors are demanding greater value for money and greater evidence of impact. This financial pressure is coupled with increasing workloads as Cochrane Reviews grow in scope and complexity and the number of new contributors wanting to produce Cochrane Reviews rises inexorably, whilst the number of high-quality reviews published in other competitive journals also increases.

To me it is self-evident that rationalizing and securing our global network of Groups is not only vital to organizational sustainability, but also to our whole aim of producing high-quality, accessible evidence. You have been able to read about the proposals for the Structure and Function project in an email sent last week to all Groups and also made available on our Community site, so I won’t repeat the details here, but I would like to use this opportunity to summarize some of the thinking behind the plans:

The CSG has provided a mandate for this change – we have a desired destination and now we need to work out how to get there. Members of the Central Executive Team will be working with collaborators from across all parts of Cochrane to refine, evaluate, and improve the proposals over the coming months. The consultations will start in a few weeks, and will include multiple webinars and other opportunities aimed to ensure an inclusive process, particularly in relation to geographic and linguistic diversity. The forthcoming Colloquium in Seoul, which is aptly focussing on how Cochrane can respond to its challenges, will provide a key opportunity for input.

Alongside the main Structure and Function project, there are two other initiatives this year that are playing an immediate and significant role in our goal of building an effective and sustainable organization: governance reform and the launch of Cochrane’s membership scheme.

The CSG announced earlier this year a proposal to move to a new governance structure, including development of a new Cochrane Governing Board following  a review of governance that the Steering Group completed last year. Full details of the proposal are available on the Cochrane Community site. At the strategic session in London, participants focussed on ensuring a meaningful voice for Groups in the new governance structure. This is likely to be achieved through the development of a ‘Council’ that will incorporate members of the Group Executives and Boards. The CSG’s Governance Reform Working Group is now assessing and developing the recommendations made by the participants in London and will provide a detailed proposal for consultation and eventual ratification at the forthcoming AGM in Seoul.

The introduction of a membership scheme for Cochrane will also be transformational: allowing us to greatly expand our overall capacity, the number of active supporters and members able to be involved in our work, and – we hope - creating a better experience for newcomers, all without adding to Group staff workloads. Membership will make it possible for anyone to ‘join’ Cochrane, so that being part of the organization is no longer limited to writing reviews. New clear pathways will be developed so that anyone can get involved with a task that is suitable for them. The scheme will be officially launched at the Seoul Colloquium and in the meantime, you can read about progress on the Cochrane community site.

Nobody should fear that this new phase of organizational change is a way of reducing human resources. Cochrane is growing rapidly, and we are moving towards a structure that is better able to support and manage that growth, building upon many examples of excellence and providing opportunities for increasing Groups' capacity to identify their own solutions. At the Cochrane Group level we want to implement more efficient editorial and production processes, and reduce duplication of effort, thereby increasing opportunities for new kinds of work. But let me be clear; we are an organization doing a huge job with a comparatively tiny number of staff: around 500 Group and Central Executive staff compared to more than 38,000 registered contributors. Whilst we might see the consolidation of activities and certain resources by Groups, we are not seeking a reduction in staff numbers  – that would be incredibly counter-productive. It is my firm belief that we are moving towards a model that promotes new opportunities and career development for individuals working within Cochrane, whilst at the same time addressing the challenges of working more efficiently and effectively together, increasing the value and the value for money of the evidence we produce; and therefore sustainability of the organization as a whole.