The Brazilian translation team have been modifying English language Cochrane podcast scripts before translating them into Portuguese, in order to make them more suitable for their local audience. Patricia Logullo, translation editor at Cochrane Brazil, tells us more about the changes made to the scripts, and how listeners have responded.

How did the initiative begin?

The Portuguese translation team at Cochrane Brazil felt that while Cochrane podcasts have the potential to be a great tool for disseminating health evidence, the podcast scripts were too long and too difficult for the average Brazilian listener to understand.  When translating from English to Portuguese, the Portuguese text can often end up being up to 30% longer than the original. Therefore, we decided to make tweaks to the scripts before we translated them and recorded the audio files in Portuguese.

What did we change?

Our main focus was finding a way to shorten the podcast script length significantly, by avoiding repetition of ideas and content. We established a rule that any podcast produced by us could be a maximum of 5 minutes in length. We believe that 10 to 12 minutes is too long for those using their mobiles to hear podcasts, especially on public transportation, and that these messages should get to the point quickly. We organized the podcast texts in the way radio journalists usually do, in segments, starting with a lead. In this way, it was possible to predict how long would a recording take, based on previous recordings used as a test. Then we produced a new text, divided into separate sentences (one per line), to make it easier for the journalist recording the podcast to read. We teamed up with radio journalist Tatiana Ferraz, who is also a volunteer at Cochrane Brazil, and responsible for recording all our podcasts. 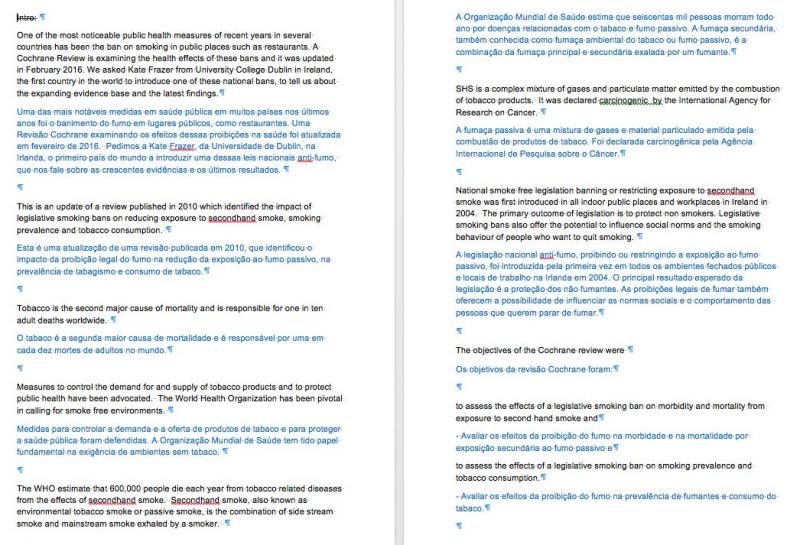 Has the scheme been a success so far?

We tested two podcasts, recording the long, original script and also the new, shorter, reorganized script, and asked lay people to give their impressions, comparing them in a very informal way. These people felt that the short version was better than the original, and so we started to record the short, edited versions of the podcasts.

So far, we have seen a 42% rise in views of our website in August, compared to July, with 48% new visitors. It seems that people are getting familiar with our page and information, as there were around 20% repeat visitors in both months. We are still monitoring the statistics, and we hope we can present more details at future translation teams meetings.

Example of a podcast produced by Cochrane Brazil: http://brazil.cochrane.org/news/leis-antifumo-melhoram-saúde-das-pessoas-que-não-fumam