Cochrane at the WHO: supporting health research in the African Region and advising on immunization at the global level 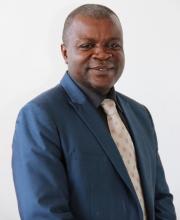 As well as serving as Director of Cochrane South Africa, Charles Shey Wiysonge is active with WHO work, both on health research in the WHO African Region and advising on immunization guidelines globally. In this interview, he gives an overview of this work.

Could you give a quick introduction to yourself and your work within Cochrane?

I have been the Director of Cochrane South Africa for two years. I also produce reviews with several review groups and am an editor with the Cochrane Infectious Disease Group.

My first contact with Cochrane was seeing an advert for the Cochrane Aubrey Sheiham fellowship in 2000, which was part of an effort to get more people from low-and-middle-income countries involved with Cochrane activities and evidence-based healthcare. I applied and was the first recipient, spending 4 months at the UK Cochrane Centre learning how to do systematic reviews. The two reviews I did during the fellowship were among my first publications – along with a Lancet article I wrote with Jimmy Volmink, then Director of Cochrane South Africa, about the importance of systematic reviews in research capacity development. It was a great start!

You are also quite engaged with WHO activities, particularly with the WHO African Region offices. Which groups and committees are you involved in?

I have been part of the African Advisory Committee on Health Research and Development since 2012 – initially as an advisor, and now as a full member. In 2013, I became a member of what is now called the Regional Immunization Technical Advisory Group. Then, in 2015, I got involved in the Strategic Advisory Group of Experts on Immunization (SAGE), which is based at WHO HQ.

Could you tell us about your work with the African Advisory Committee on Health Research and Development?

One of the key things I have learned from being part of the Committee is the importance of active participation in whatever is happening. I have led a few documents for the Committee.

For example, I prepared a document on the importance of research to universal health coverage and the Sustainable Development Goals (SDGs) in the African Region. The paper highlighted knowledge translation, implementation research and the importance of ensuring that research is relevant to our region. This was one of the background documents for the First African Regional Forum for Strengthening Health Systems for Universal Health Coverage and the SDGs

I also supported the development of Research For Health: A Strategy for the African Region, 2016-2025. I helped prepare the background documentation and we did a bibliometric analysis on the health publications coming from Africa, looking at how they were distributed and how Africa compares worldwide.

I was also part of a small group that developed the African national health research systems barometer to monitor the development and performance in the region.

And, of course, I have given presentations for the Committee about Cochrane and the Cochrane Africa Network.

Can you give an overview of your work in SAGE and the different working groups you have participated in?

SAGE is WHO’s advisory committee for anything related to immunization. I became a member in 2015 and have just come to the end of my term.

SAGE has adopted the GRADE approach for rating evidence. While I am stepping down from the main SAGE committee, I will stay involved in the methodology working group, which includes both SAGE members and people involved in methods work around vaccines, ensuring that SAGE stays at the forefront of what is happening in methodology and using evidence to develop guidance.

Apart from that, I chaired the SAGE working group on the BCG vaccine. Until recently, the WHO BCG position paper was the oldest, so this group reviewed the evidence to update it.

I was also part of a group on tetanus. Tetanus was supposed to be eliminated in mothers and their newborn babies by 2015, yet there are still some countries yet to achieve this. This group is looking at what went wrong and what can be done to energise that global work.

In addition, I am part of the SAGE group on Ebola, which was set up during the outbreak in West Africa in 2014 to review the data on vaccines and what recommendations could be made. SAGE has been producing interim recommendations, the latest of which were discussed at the main SAGE meeting in April and published.

I led a session at the April 2016 SAGE meeting on missed opportunities for vaccination – where those eligible to receive a vaccine come into contact with the healthcare system yet do not get it. Based on this, WHO produced guidance on what countries can do to assess missed opportunities and how to intervene, and a lot of activity has taken place over the last couple of years.

I am also part of the Measuring Behavioural and Social Drivers (BeSD) of Vaccination group, which WHO HQ launched in November 2018. The group’s objective is to advance the development of tools and guidance that enable immunization programmes to measure and address local reasons of under-vaccination, and to track consistent and comparable data over time at a national and global level.

Cochrane Africa recently started a project with the WHO African Region to support evidence-based decision making in Member States. What will this involve?

WHO has contracted Cochrane Africa to work with the WHO African Regional Office to develop evidence-based health policy briefs for Member States in the region. These briefs will serve to guide actions towards the attainment of universal health coverage and other SDGs. In addition, through this project, Cochrane Africa will build the capacity of WHO staff on how to conduct and, especially, how to use Cochrane reviews in decision making.

During the first week of June 2019 we held a Cochrane Africa–WHO joint meeting to discuss and lay the groundwork for this project. The week ended with a two-day Cochrane workshop on systematic reviews and policy briefs. In his closing remarks, the Director of Programme Management at the WHO African Regional Office emphasised that WHO is committed to using the best available evidence to optimise its support to countries. WHO considers Cochrane Africa as an indispensable stakeholder on that journey.

How does Cochrane evidence inform the different WHO activities you have been involved in?

Cochrane is seen as the pinnacle of evidence and is the go-to source. Cochrane Systematic Reviews are well-respected; before anything is done, we often make sure that reviews are commissioned if there is no up-to-date Cochrane review.

I was also asked to represent SAGE within the Evidence-Based Recommendations Group of the Advisory Committee on Immunization Practices in the US, where we looked at adapting the evidence to decision frameworks for use in recommendations for the US. I think I was chosen to represent SAGE in that group partly because of my work and experience with Cochrane. 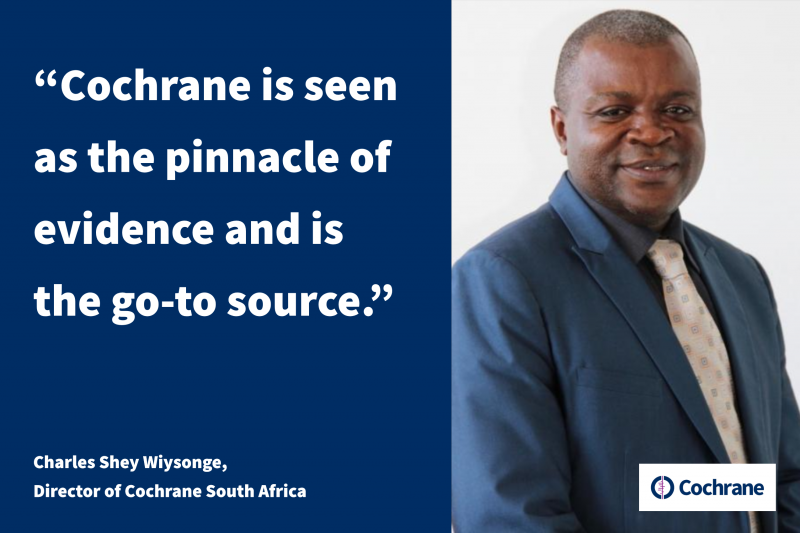 What advice would you give to members of the Cochrane community interested in getting involved in WHO work?

I would really recommend that Cochrane colleagues get involved with reviews requested by WHO, where possible. These reviews need to be done especially well because the findings are taken very seriously and are used to inform WHO recommendations.

Another way of engaging is through working groups – both content and methodological expertise is needed, so if there is a working group in your area of interest, try to get involved.