Coming soon: crowdsource the screening for your review

Just think how much time could be saved if you could crowdsource the screening for your review! Cochrane Crowd are trialling just such a service, known for now as Review Screen, or RevScreen for short.

The Cochrane Crowd team envisage extending the established system to create efficiencies for individual reviews. Anna Noel-Storr, Co-Lead of Cochrane Crowd, explains, “We know that Cochrane Crowd works to screen RCTs for CENTRAL. Our Crowd of nearly 6,000 volunteers has screened well over 450,000 abstracts, finding around 34,000 RCTs – a brilliant collective effort. Alongside the existing process, we want to see if the system could be harnessed to deliver benefits directly to review teams by having the Crowd identify RCTs from the search results of individual reviews.”

So far things look very promising. Anna says, “Pilots have been completed for four reviews, with Cochrane Crowd volunteers jumping at the chance to work on these specialized screening tasks. It is incredibly efficient, with screening for the pilots being completed as quickly as 4.5 hours. Review teams have offered acknowledgement to volunteers who screen more than 200 records which has proved to be a good incentive to the Crowd.” The image below shows some of the key results for the four pilot studies. 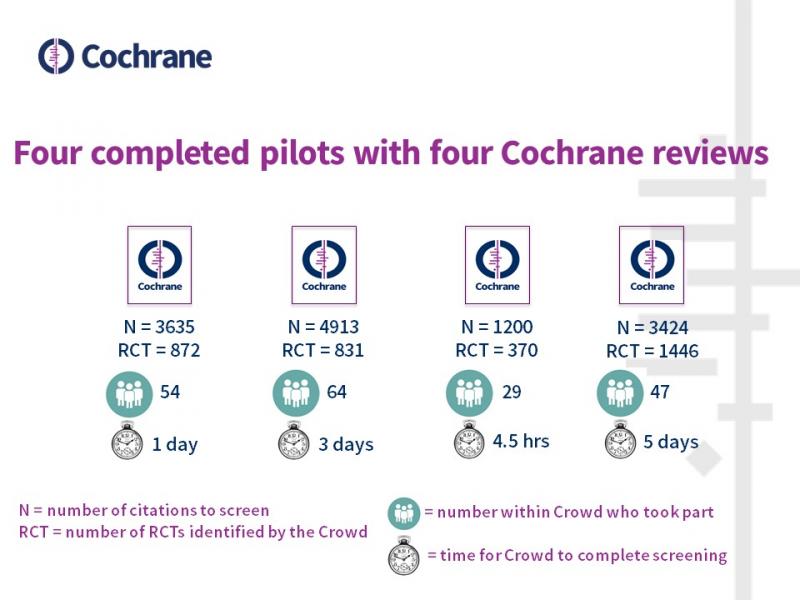 Miranda Cumpston, Head of Learning and Support, Cochrane Central Executive, trialled the service recently, with the Crowd taking just four hours to screen 1,200 records and finding 370 RCTs. “This is an incredibly useful service, and the Crowd was super-fast in screening the records. It will be especially useful for large search datasets for which removing the non-RCTs can save a significant amount of time and reduce the burden on the review team.”

Colleen Ovelman, Managing Editor and Information Specialist at Cochrane Neonatal, has also trialled the service and recommends it to other review authors. “This is a wonderful system! I see crowdsourcing as a very promising way to engage others in the work we do with Cochrane, and there is no doubt that Cochrane Crowd, through this new service, can make the review process more efficient.”

So what next for this innovative service? The Cochrane Crowd team are making tweaks to the platform based on pilot feedback and are aiming for broader launch in the second half of the year. “We’re making a few technical changes with the aim of improving system efficiency without compromising accuracy, and to enable review teams to access screening results directly, as soon as screening has been completed, rather than the Crowd team acting as gatekeepers. We’re also developing some guidance to help authors teams understand just what Cochrane Crowd could do for them. It’s early days and, as with any new process, we need to make sure we keep a close eye on early use of the service. However, the pilot work done so far has been very encouraging and I’d just like to say a very big thank you to all those who contributed to those pilots, and to the author teams who took part”, says Anna.

Sign up to Cochrane Crowd to be amongst the first to hear new updates about RevScreen.

To hear more about Cochrane Crowd, you can watch this short video. If you have questions about RevScreen, or would like more information, contact the Cochrane Crowd team at crowd@cochrane.org. You can also keep up-to-date with Cochrane Crowd’s news by following them on Twitter.