Conflicts of interests and authorship: lessons from a revised policy

Cochrane’s revised policy on conflicts of interest (CoI) was launched in October 2020. Since then, Cochrane’s Research Integrity team has been working with authors and editorial teams to support the implementation of the policy and has been learning about the challenges that arise. One such challenge has been the suggestion of authorship changes by authors and editorial teams as a way to comply with the CoI policy. This blog post from Stephanie Boughton, Research Integrity Editor in Cochrane’s Research Integrity team, addresses why such authorship changes are not a solution to CoI policy breaches and what should be done instead.

The CoI Policy for Cochrane Library content (2020) differs from equivalent policies in many journals in that, as well as requiring declarations, it also limits or prohibits involvement in a particular Cochrane Review for individuals with certain conflicts.

The policy also places restrictions on the author team as a whole, with a requirement that two-thirds are free of all relevant financial CoI. Finally, there are also restrictions on what a review author who is also an author on a study that may be eligible for inclusion can do in relation to the review.

Collectively, these measures aim to minimize CoI and maintain the highest levels of objectivity and user confidence in content published in the Cochrane Library.

In the 18 months since the policy launch the Research Integrity Team and CoI Panel have received a variety of CoI referrals and queries from Cochrane Review Groups and review authors as the policy has been applied to new protocols, reviews and updates. Among these, two recurring issues stand out – firstly how related CoI and authorship are, and secondly, the importance of collecting CoI declarations early in the process, before any work has begun, and ensuring that authors are aware of the importance of not gaining further relevant CoI while working on the review.

When are authorship changes not a solution to CoI policy breaches?
In situations when conflicts resulting in a breach of the CoI policy have come to light at a later stage in the review process, after work has begun, we have received questions about whether changes to authorship could resolve the issue.

An example is when a first or last author has declared a relevant CoI during the review process, and we have been asked if changes can be made to the order of authors, moving the conflicted author to an allowable position as a middle author.

We have also seen cases where there have been requests to remove a conflicted author from the author team after they have already worked on the review, either so that the author group meets the requirement for two-thirds of authors to be free of all relevant financial CoI, or so that someone with a CoI that prohibits involvement in Cochrane Library content is not listed as an author.

In all these examples, changes in authorship are not a way to comply with the CoI policy because such changes do not remove any potential effect that the CoI may have already had on the review.  Instead, changing the authorship serves only to mask any effect the CoI may have had, and may be misleading. Furthermore, authorship changes at a late stage do not adhere to standards for authorship described below.

In these cases, to comply with the CoI policy, the review must start over with a new author team that complies with the policy, highlighting the importance of checking CoI early in the process.

The importance of collecting CoI declarations early
Under the CoI Policy for Cochrane Library content (2020), CoI declarations are collected at multiple stages before and during the review process. This starts with the collection of declarations of interest from all proposed authors before any work begins (at title registration, or before the decision is made to update).

Collecting and checking potential CoI at this early stage, coupled with review authors being made aware from the start of the importance of not gaining further relevant CoI during the review process, and the consequences of doing so, helps prevent problematic situations from arising later in the review process.

Authorship
As with collecting and checking CoI early on in the process, agreeing authorship and position in the author line up early on ensures everyone is aware of their role on the review and can prevent potential issues, such as authorship disputes, arising later in the process.

In addition to Cochrane following guidance from the Committee on Publication Ethics (COPE) on authorship, such as obtaining written agreement from all authors for any changes in authorship after work has begun, we have also recently updated the authorship policy in the Cochrane Database of Systematic Reviews editorial policies to clarify that authorship changes, including changes in author order, are not a solution for resolving CoI breaches. 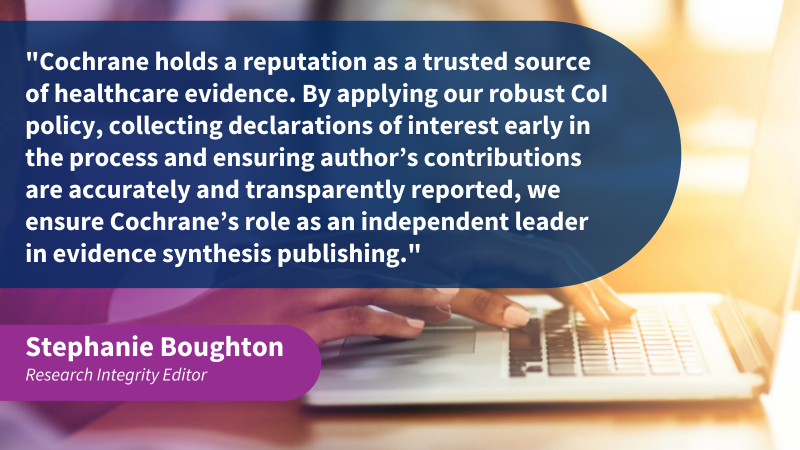 Further help and advice
Resources to help with applying the policy are available for Cochrane Review Groups and authors on the CoI portal, including answers to FAQs from Managing Editors and a quick guide to the CoI Policy for Cochrane Library content (2020) for authors.

Cochrane’s Research Integrity Team is also available to answer any queries about the CoI policy – either via our CoI referral process for those relating to a specific review, or via email to coiarbiter@cochrane.org for more general queries.

You can also learn more about the research projects the Research Integrity Team is involved in here. If you would like to get involved or have any suggestions for relevant projects, we’d love to hear from you at researchintegrity@cochrane.org. 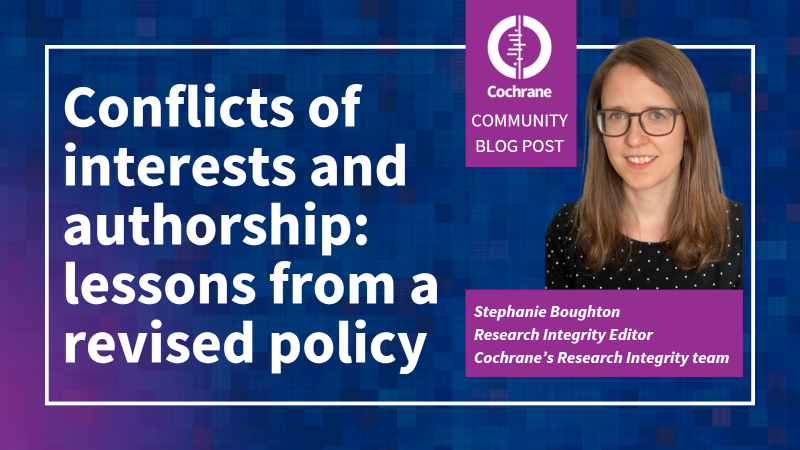