The Plain Language Summary Project, which began in May 2020 to see whether a team of professional writers could improve the quality, consistency, and translatability of Cochrane PLSs, has now ended. The project was undertaken with the support of Central Executive Team staff and a number of Cochrane Review Groups (CRGs), and support from our language translation teams and Cochrane Consumers.

What was the motivation behind this project?
Although Cochrane has published Plain language summaries (PLSs) for all reviews for around 20 years now, their quality has been variable, with some PLSs being too complicated, technical and inaccessible to people who were not medically trained.  Since PLSs should be able to be understood by as broad a range of people as possible, from different countries and with different levels of education, it was decided that we should try to improve the situation.

What was the overall aim?
There were three main aims, which were to make PLSs easier to read, understand, and translate into languages other than English.

Why is the PLS so important to Cochrane and as part of Cochrane Reviews?
PLSs distill down the most important points of reviews.  They form the basis of many other products used for dissemination of findings, for example, press releases, blog shots and infographics. They provide a foundation on which other endeavours rely.

What happened in the project?
We employed three professional writers to see whether having dedicated specialists in plain language would improve the standard of the PLSs Cochrane published.  The writers wrote the PLSs for all reviews and updates published through the Central Editorial Service and the MOSS (Musculoskeletal, Oral, Skin and Sensory) and PHHS (Public Health & Health Systems) networks, plus one or two from another 21 Review Groups.  During the year for which the project ran, the writers produced PLSs for 166 reviews and updates from a total of 35 Review Groups. 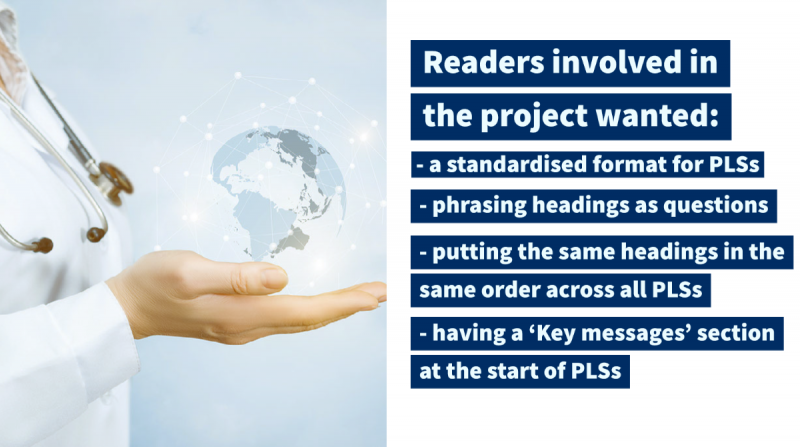 What have you learned?
Over 450 people provided input for evaluation of the project.  They expressed a strong preference for:

The Review Groups told us that having access to PLS writers was a tremendous help, and something that they would value highly if it were to continue.

How might PLS writing develop going forward?
The writers have developed a template for writing PLSs, and guidance to support people writing PLSs.  The template and guidance are currently being user tested (until 31 August 2021).  Once the testing is complete, and feedback considered, these documents will be finalised. We will then request approval from the Editorial Board to deploy their use across Cochrane.

At present, we do not know whether Cochrane will be able to employ people to write PLSs beyond the duration of this project.