TaskExchange is Cochrane’s online platform that connects people needing help on health evidence projects (Cochrane and non-Cochrane) with people who have the time and skills to help out. TaskExchange now has almost 2,100 contributors collaborating on systematic review and guidelines projects, with tasks including language translation, consumer and clinical review, data extraction, screening and guideline development.

We are always evolving and improving, and our most recent features aim to make TaskExchange even better for translators as well as newcomers to the world of evidence. 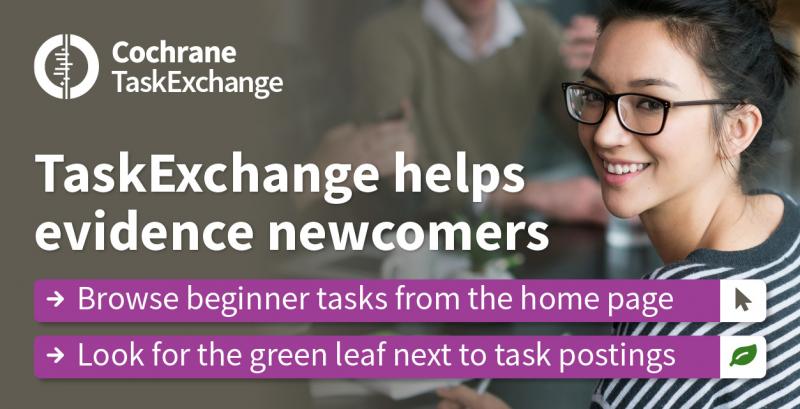 Evidence newcomers can now browse beginner tasks directly from the TaskExchange homepage. And all beginner tasks are marked with a green leaf, so they can be easily identified in the general task list.

‘Many of our contributors join TaskExchange to build skills in evidence production,’ says Tari Turner, Co-Lead of TaskExchange. ‘They may be medical or allied health students, Cochrane Crowd members, or people with a general interest in evidence but little or no hands-on experience. We wanted to make it easy for these people to start contributing to evidence. On TaskExchange, evidence newcomers can now access appropriate tasks directly from the homepage. They no longer need to wade through tasks requiring significant prior experience. This will make it much easier for them to get involved.’

If you’d like to gain evidence skills, visit TaskExchange today and browse the tasks for beginners! 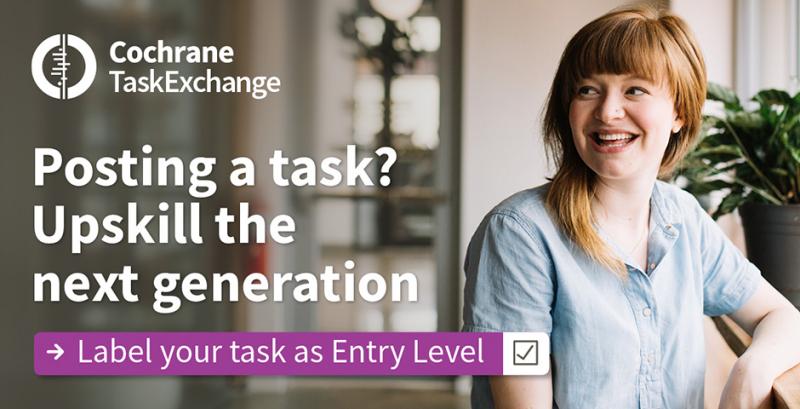 Task posters now have the option of labelling their task as entry level; that is, appropriate for evidence newcomers. It’s as easy as ticking the box when you fill out the details of your task!

These changes have been well received by student communities. ‘At Students 4 Best Evidence, we’re really excited to learn about this new TaskExchange feature, which aims to make it clear which tasks are suitable for students’, explains Selena Ryan-Vig, Students 4 Best Evidence facilitator. ‘Not only will this make it easier for students to contribute to the work of Cochrane, but it also offers them the opportunity to gain really valuable experience and knowledge along the way. Hilda Bastian, one of the founding members of Cochrane, once said ‘young people are the most striking phenomenon. They’re bringing a blast of energy, enthusiasm…and cutting edge scientific work with them. It’s fantastic that TaskExchange are finding new ways to try and harness this.’

If you’re posting a task, consider labelling it as an entry level. Head to TaskExchange to post a task today! 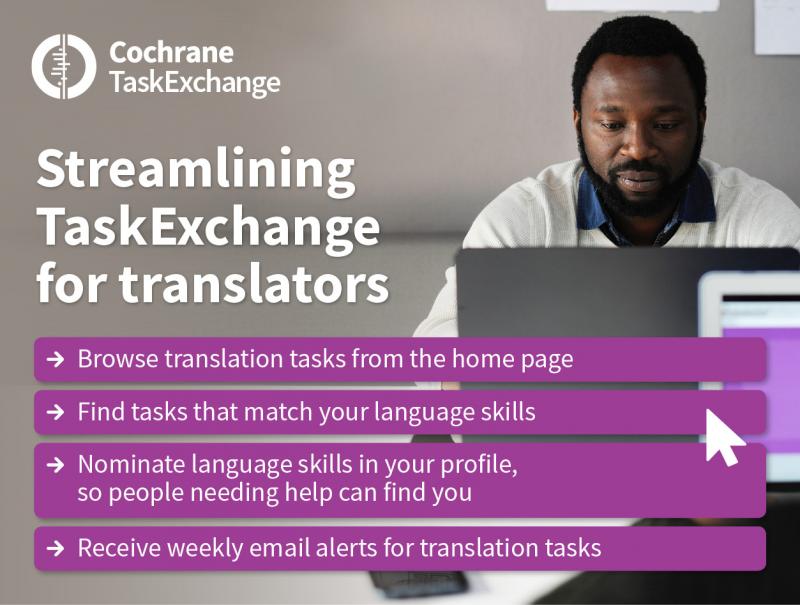 Translation tasks are very popular on TaskExchange, and the platform has a dedicated group of translators with skills in many languages. To streamline the platform for translation tasks, several changes have been made. These include the ability to browse translations tasks from the home page, to filter for tasks in a particular language, to receive weekly email alerts related to that language only, and to nominate language skills in personal profiles.

Juliane Ried, Cochrane’s Translations Co-ordinator, explains, ‘We receive a lot of interest from volunteers who want to contribute to Cochrane and make use of their language skills. TaskExchange has already proven to be a great platform to help these people put their skills to work. The new language features will make it even easier for polyglots and those looking for their help to come together. TaskExchange has become an instrument to facilitate the multi-lingual nature of Cochrane’s community and research.’

If you’re a translator interested in working on health evidence projects, head over to TaskExchange and browse the translation tasks today!