In 2019, Nicole Skoetz won for her paper; ‘Methodological review showed correct absolute effect size estimates for time-to-event outcomes in less than one-third of cancer-related systematic reviews.' We asked her about this award and what it means to her.

What made you decide to enter for this prestigious Cochrane award?

The award was suggested to me by Elvira van Dalen, one of the co-authors of the paper. When we read through the description of the prize, which focuses on Cochrane's value of criticism, helping to improve its work and thus achieving its aim of helping people make well-informed decisions, we decided to apply.

Can you tell us a little more about what made you decide to enter for the Prize and the process involved?

The published paper, for which I received the prize, reveals some challenges in the interpretation of hazard ratios as absolute effects.

Together with the co-authors and the GRADE working group, we now want to make sure that reviewers and policy developers are aware of these challenges and know how to avoid mistakes. Since the publication of the paper, the GRADEpro software has been adapted and contains additional information for calculating the risk rates as absolute effects. An accompanying paper will be published shortly. We also offered a webinar and workshop to train authors and guideline developers.

We believe this is what is mentioned in the prize description: Critical science, which then improves the quality of Cochrane reviews and contributes to an improved decision-making process on health-related questions. 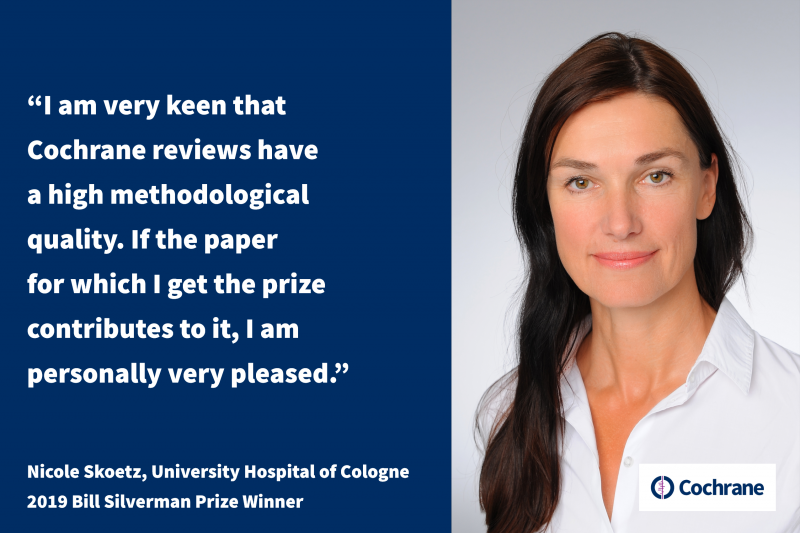 How did it feel to win? What does this award mean you, personally?

Thank you very much for this prize, it is a great honour to receive the Bill Silverman prize as it explicitly rewards critical science. I would also like to thank all the co-authors who contributed to the publication of this paper and who are now also involved in follow-up projects to solve the identified challenges.

I have been a member of Cochrane for a long time and as a senior editor for the Cancer network, I am very keen that Cochrane reviews have a high methodological quality. If the paper for which I get the prize contributes to it, I am personally very pleased.