Elizabeth Clearfield is a regular task poster on TaskExchange, Cochrane’s online platform that connects people needing help with their systematic review, with people who have the time and skills to help. Elizabeth sat down recently for a chat with Emily Steele, Community Engagement and Partnerships Manager for TaskExchange, to talk through her experiences with TaskExchange to date. 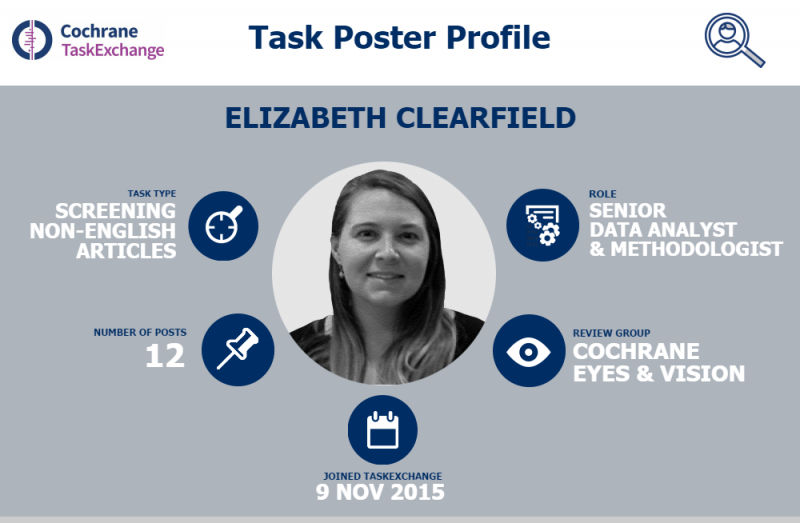 Hi Elizabeth, thanks for putting aside some time to chat today. To start with, can you tell me a bit about your work, and how it brought you to TaskExchange?

Hi Emily, sure. I’m a Senior Data Analyst and Methodologist with the US satellite of Cochrane Eyes and Vision. We’re based at the Johns Hopkins School of Public Health. I work in a team of four methodologists, and we support review authors throughout the review process, from helping with protocols through to offering editorial support prior to publication. Our group aims to publish 20 reviews or updates a year, and I personally work on around six or seven a year.

So how did you get into that sort of work?

I did an Epidemiology Master’s degree which I finished in 2011. I started out working in injury epidemiology and as part of a major technical report we were working on, we performed a systematic review. I was given the task of organizing this very large review and did a lot of research into aspects of a high quality review, including things like judging included studies on risk of bias. I liked working on synthesizing evidence to answer a clinical question and when I was looking for new positions and found this around two years ago, it was a perfect fit.

Great! So how did you first hear about TaskExchange, and what motivated you to start posting?

One of my colleagues, another methodologist in the Eyes and Vision Group, met TaskExchange’s Co-Lead, Tari Turner, at the 2015 Cochrane Colloquium in Vienna, and he came back quite excited about it. Especially about the potential for it to help us find support for screening non-English articles. We tend to come across a lot of Chinese articles in ophthalmology research. One of our previous methodologists was Chinese, but when she left in the summer of 2015 we had to come up with a new strategy for those articles. And then along came TaskExchange!

Tell me about your first experience posting on TaskExchange.

So not long after my colleague came back from Vienna, I was working on a review where we needed to screen three non-English articles. So I hopped onto TaskExchange, set up a profile, and uploaded three posts. In those early days, it took a little longer than it does now to find helpers on TaskExchange, but I did find someone for all three tasks.

And how have you used TaskExchange since that first experience? What’s your process?

All up I have posted 12 tasks, all of which have focussed on screening non-English articles for inclusion in a review. I tend to post in batches, where each batch is related to a particular review. Review authors will do a literature search and then they’ll come to me with a number of non-English studies that need screening. I’ll first look to people in the Group’s network who may be able to help, and if that doesn’t turn up a helper, I’ll post on TaskExchange on behalf of the author team.

And have you found people through TaskExchange?

Yes, I’d say two-thirds of the time I have found someone. Success depends in part on the language. For example, it has been easier to find someone for work in French compared with Serbian. Also, looking back, I see that it’s getting easier to find helpers. The times TaskExchange hasn’t been able to help were in the early days when there weren’t as many TaskExchange members.

And how long has it taken to find people on TaskExchange?

That has varied, I think overall it’s getting quicker - nowadays it tends to be anywhere from a few days to a couple of weeks. I think it helps that the tasks are not very time-consuming. In my posts, I’m clear that I’m not asking for a full article translation, I just need help to screen the article, which in practice means the helper does a quick scan for three key things in the article: whether it is a randomized trial, if it focuses on the comparison of interest, and if it includes the types of patients that the review will focus on. These things are all part of the PICO that the review authors have listed in their protocols.

So going back to the process, if someone screens a non-English article and it is eligible for the review, what about the data extraction?

I ask the helper directly if they’re interested in doing the data extraction. Most of the time they are interested. Sometimes they don’t have experience in data extraction for a systematic review, but I’ve been able to support them to do the work, and it’s always been an efficient process.

So I’m guessing you’ve now got a pool of helpers you can go to directly, for this sort of work?

That’s right. The helpers I’ve met through TaskExchange have become my ‘go-to’ helpers. When new languages come up in our literature searches, I go back to TaskExchange.

I’m interested in what type of people respond to your posts. Have you found they’ve got the right skills to help?

When people respond to a post they tend to mention why they think they’re the right person for the job. So far I’ve only posted tasks related to non-English language ability, so it’s fairly straightforward in terms of navigating whether someone has the right skillset.

Responders have either been students, or people who are looking to do their own systematic review, or get involved with Cochrane systematic reviews. The latter two groups are usually researchers-in-training, or health practitioners, with non-English language skills.

Are there any standout experiences with TaskExchange you'd like to mention?

Yes, I was able to meet Bobby Xiao, one of the helpers I’d worked with, at last years’ Colloquium in Seoul. He was someone I’d had quite a lot of email correspondence with, as he’d done screening as well as data extraction for a Chinese paper. He emailed before the Colloquium to let me know he’d be there and was interested to meet. It was a really lovely experience to meet face-to-face, and he’s since done more work for us. He’s now my ‘go-to’ for Chinese articles.

What are some of the challenges of working with TaskExchange, if any?

I can’t think of any challenges. TaskExchange has grown a lot in terms of tasks posted and responders available, and I think it’s just getting better and better from a poster’s perspective.

Well, that’s good to hear! Looking forward, is there anything else you’d like to use TaskExchange for?

I have access to a lot of students through John Hopkins, and I am able to go to them directly for tasks such as literature searching, screening and data extraction for English articles. So at the moment I don’t really have a need to use TaskExchange in other ways. Perhaps if I have a large review in the future that requires a lot of screening, I would go to TaskExchange.

Absolutely! There are also plans to open up Cochrane Crowd as a screening service for individual reviews later this year, which would allow you to access the entire Crowd of >5000 people!

Well, thanks so much for your time today, Elizabeth. Anything else you’d like to add before we wrap up?

For anyone who’s considering using TaskExchange – do it. It can make life very easy!

Also, I’d say on behalf of the helpers, be sure to acknowledge helpers in the review, and send them a copy of the review once it’s been published, to close the loop.

To get involved with TaskExchange, head over to the website and post a task or volunteer to help, and follow TaskExchange on Twitter to keep up with the latest news. For further information, email taskexchange@cochrane.org.