Every year Cochrane recognizes the outstanding work of Kenneth Warren, a scientist, extremely influential in drawing attention to the 'great neglected diseases' that plague people in developing countries. He prioritized the need for valid summaries of key research studies and to the way electronic media could be used to disseminate results of health research.

Kenneth was an enthusiastic supporter of the pilot work in pregnancy and childbirth that led to the creation of The Cochrane Collaboration, and, with Fred Mosteller, he co-organized the meeting at the New York Academy of Sciences at which the vision for Cochrane was first made public.

The Kenneth Warren Prize is awarded every year by Cochrane to a scientist who publishes a Cochrane Review about a health issue in developing countries. The winning entry judged to be both of high methodological quality and relevant to health problems in low income countries. 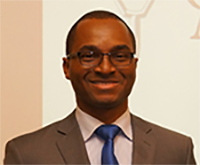 2017’s winner is Ahizechukwu Eke, for 'Hepatitis B Immunoglobulin for the prevention of mother to child transmission of hepatitis B virus'.

How did it feel winning the prize?

When I learnt I won the prize, I knew it was God who did it for me. I was stunned! It took a while to sink in but then I enjoyed my moment of fame. It was a complete surprise to have been selected for the prestigious Kenneth Warren Prize. It was the first time I had submitted any work for consideration for this award, and being selected was really exciting. I personally experienced what a friend of mine told me 2 years ago - 'winning an award is about the least humbling thing in the world, and yet when people receive an award or some other illustrious honor, they often say they feel “humbled.” Really, what winners feel is immense pride—and immense fear of being seen as prideful—and so they cover for it by saying they feel the exact opposite, humility’…Haha. I truly felt humbled and honored that our work won this award. Special thanks to all my co-authors, especially Dr George Eleje. Above all, I give God all the glory.

How did you first find out about Cochrane, and indeed the Kenneth Warren Prize?

I first found out about Cochrane and the Kenneth Warren Prize in 2009 when I attended the International Federation of Gynecology and Obstetrics (FIGO) conference in Cape-Town, South Africa. During that trip, I visited the South African Cochrane Centre (SACC) where I read about Kenneth Warren. I was really inspired by his work. Since 2009, I have had a variety of roles in Cochrane in preparing several reviews and serving as an Associate Editor (Cochrane Clinical Answers), as an author and a peer reviewer. I am a member of six different Cochrane Review Groups (Pregnancy & Childbirth, HIV-AIDS, Gynaecology & Fertility, Gynaecological & Neuro-Oncology, Pain & Palliative, and Hepato-Biliary Groups). As at February of 2018, I have authored and published quite a number of Cochrane Reviews and protocols. In five of the reviews, I am the lead author. Five years ago (2013), I was appointed as an Associate Editor of the Cochrane Clinical Answers (CCA), working with Cochrane Editors Sera Tort and Karen Patterson to publish 17 CCAs to date. This extensive exposure to Cochrane Review standards gave me a basis for parallel work on projects and initiatives intended to bring Cochrane Reviews into practice. I have also helped Cochrane’s efforts to promote awareness of and engagement in the review process across the developed and developing world.

Can you tell us a little more about what made you decide to enter for the award and the process involved?

I decided to apply for the Kenneth Warren Prize for 4 important reasons: First, this review (Hepatitis B immunoglobulin during pregnancy for prevention of mother-to-child transmission of hepatitis B virus Cochrane Database Syst Rev. 2017; 2:CD008545) has very high methodological quality. The review has been judged to have made one the greatest contribution to the advancement of knowledge in the field of Infectious Disease and HBIG prophylaxis in pregnancy by experts in the field. Second, significant amount of work went into making this review a success. It took 7 years of rigorous review process from publication of the protocol (in 2010) to full review completion and publication (in 2017) despite constant work and revision of the review. Between 2010 and 2017, we worked on this review constantly. The review was checked in and out of RevMan 340 times over the 7 year period. In addition, we replied to 16 different peer reviewers who reviewed the protocol at different times between 2010-2017 before the review was approved for publication! Third, the review applied one of the most rigorous methodologies in Cochrane Reviews - Trial Sequential Analysis (TSA) on the outcomes to calculate and assess the eventual breach of the cumulative Z-curve of the relevant trial sequential monitoring boundaries for benefit, harm, or futility. A more detailed description of Trial Sequential Analysis can be found in the review. And most importantly, this review addressed a very significant health problem affecting pregnant women in developing countries – Hepatitis B.

The application process is simple - email your published review to admin@cochrane.org before the deadline (submission opens on 4 May 2018). Be sure you are the principal author of the review published on the Cochrane Database of Systematic Reviews in the Cochrane Library, in Issues 4-12 of the previous year and issues 1-3 of the current year.

What’s been the impact of winning the prize to you, and your work?

Since winning the Kenneth Warren Prize, I have found a leadership niche to further this organization’s drive towards inclusive scholarly interchange. I have actively increased the geographical diversity of Cochrane by collaborating, training and mentoring new authors from around the world. Along with my collaborator, Dr. George Eleje, I have set-up networks of authors in developing countries, creating new groups and committees to encourage rising scholars from African nations in particular. In my current role, I have been responsible for leading projects which demand teams to trust and respect my experience and my decision making. My leadership style involves management skills, but mostly relies upon the trust my teams have in me, to make informed, inspired decision-making, matched with personal character and a positive attitude. A large part of my style involves the use of effective planning; organizational systems; and appropriate communications methods, in part due to having the necessary tools built from experience in leadership roles.

Finally, how important is this prize, its heritage, and prestige in promoting Cochrane and evidence based health care?

The heritage and prestige of this prize is important. Kenneth Warren was an exceptionally persuasive scientist who drew attention by prioritizing dissemination of valid management summaries of 'neglected diseases' that were endemic in developing countries. Even more interesting to me as an Obstetrician/Gynecologist was that Kenneth Warren was an avid advocate of the preliminary work in pregnancy and childbirth that prompted the formation and establishment of Cochrane. Through the Kenneth Warren Prize, Cochrane recognizes individuals who exemplify his highest values of volunteerism, community engagement, leadership and dedication to the care of underserved populations. Over the years, winners of this award have progressed to be leaders in their various fields. They have identified strategies that increase the impact of Cochrane Reviews to evidence based medicine, including increased involvement of authors in the processes of selecting, preparing and updating reviews, and in the organizational structure of Cochrane. Through these contributions, the number of high quality, up-to-date and relevant Cochrane Reviews and the number of authors who have regular collaboration with the Cochrane entities will continue to increase. Above all, the impact this would have on science as a whole would be huge!

Cochrane’s Kenneth Warren Prize nominations open on the 4 May 2018 - learn more and see if you are eligible.