Every year Cochrane recognizes the outstanding work of Kenneth Warren, a scientist, extremely influential in drawing attention to the 'great neglected diseases' that plague people in developing countries. He prioritized the need for valid summaries of key research studies and to the way electronic media could be used to disseminate results of health research.

Kenneth was an enthusiastic supporter of the pilot work in pregnancy and childbirth that led to the creation of The Cochrane Collaboration, and, with Fred Mosteller, he co-organized the meeting at the New York Academy of Sciences at which the vision for Cochrane was first made public.

The Kenneth Warren Prize is awarded every year by Cochrane to a scientist who publishes a Cochrane Review about a health issue in developing countries. The winning entry judged to be both of high methodological quality and relevant to health problems in low income countries.

How did it feel winning the prize?

It has been a moment of joy, when the news of our systematic review been awarded with the Kenneth Warren prize. We were all charged with excitement to have been chosen as the recipient of this very prestigious award. It was the first time I had applied for Kenneth Warren Award. I feel humbled, honoured and heartened that our efforts get recognised.  Special thanks to all the co-authors and especially to Prof Meenu Singh who is my mentor and her guidance has been the driving force towards many achievements including the Kenneth Warren Award. Special Thanks to the CDPLP group for all the support.

How did you first find out about Cochrane, and indeed the Kenneth Warren Prize?

I have been introduced to Cochrane in the year 2013 by my mentor as a co-author. And My first Cochrane Colloquium attendance was in the year 2014 when it was hosted in Hyderabad, It was first instance  sensitised towards the various awards and came to know about Kenneth Warren award and the its importance. It was very inspiring and motivating to know about Kenneth Warren. I realised the importance and relevance of this award and the fame it carries.

Can you tell us a little more about what made you decide to enter for the award and the process involved?

There were several reasons to enter into the award. The kind of effort and the team work we have put in to complete the review. It took us more than usual time about 6 years to finally get the review published. The hard work of our author team and  the editorial team Cochrane Developmental, Psychosocial and Learning Problems group was constant, consistent and extensive. The topic itself is very important not only for the LMICs but for the high income group countries as well. The narrative analysis as well as meta-analysis of the studies was tricky and to put that into right perspective was again a major task for the team.

The application process was very simple. Go to the website, enter your details, the details about the review and relevant information asked. Make sure that you are the principal author as well as the review was published in the eligible issues. Just submit the application. 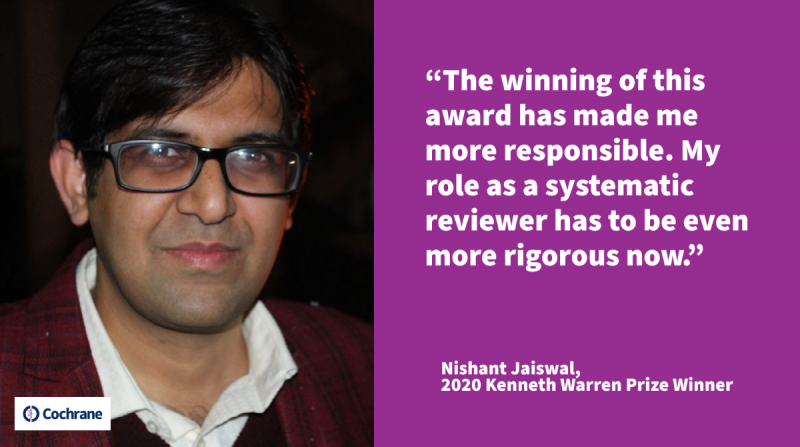 What’s been the impact of winning the prize to you, and your work?

The winning of this award has made me more responsible. My role as a systematic reviewer has to be even more rigorous now. Besides the feeling of responsibility, the winning of award has also increased the level of trust and confidence. It has now made me ready to take up even challenging topics

Finally, how important is this prize, its heritage, and prestige in promoting Cochrane and evidence based health care?

The prize recognises the exceptional people who work with dedication, hard work and are consistent & persistent in there work.  Kenneth Warren himself was an exceptional scientist who drew attention towards the 'neglected diseases' that were prevalent. The award inspires to carry forward his legacy and the past recipients have been successfully doing so. It is evident from their achievements and accomplishments. Their increasing contribution towards Cochrane and evidence based health care has been the game changer across the globe. They have been an inspiration for the young researchers like me. They have been a key to increase the participation of young researchers in the activity of Cochrane and evidence based health care.