Andrea Cervera is a translator and Communications Manager at Cochrane Iberoamerica. Here she explains her experience of translating and publishing blogshots from Cochrane UK and their impact on social media. This follows the recent blog post from Sarah Chapman, Cochrane UK, on how groups can create blogshots.

We at Cochrane Iberoamerica regularly share interesting, notable, or relevant Cochrane Reviews on our Facebook page and our Twitter profile (@CochraneIberoam), although I started noticing a while ago that if these weren’t presented as a podcast, short feature, or even as simple pictures they could seem tedious and overwhelming to an audience unfamiliar with Cochrane’s work. I often thought – as a lay person myself – that we should put more effort into reaching a broader audience by creating attractive and simplified dissemination material based on reviews (something like a trendy PLS). My counterpart at Cochrane UK must have had a similar reasoning previously, because when I first saw their Cochrane UK blogshots, I felt as if they had read my mind.

I began by asking Muriah Umoquit and Hayley Hassan if it was possible to translate the blogshots and they guided me through the initial steps:

Once all this is done, you can start translating the text and choosing the image to accompany it. Personally, I thoroughly enjoy the whole translation process; blogshots are short and straightforward texts and you can switch topic frequently, learning as you go.

Example of a blogshot in Spanish: 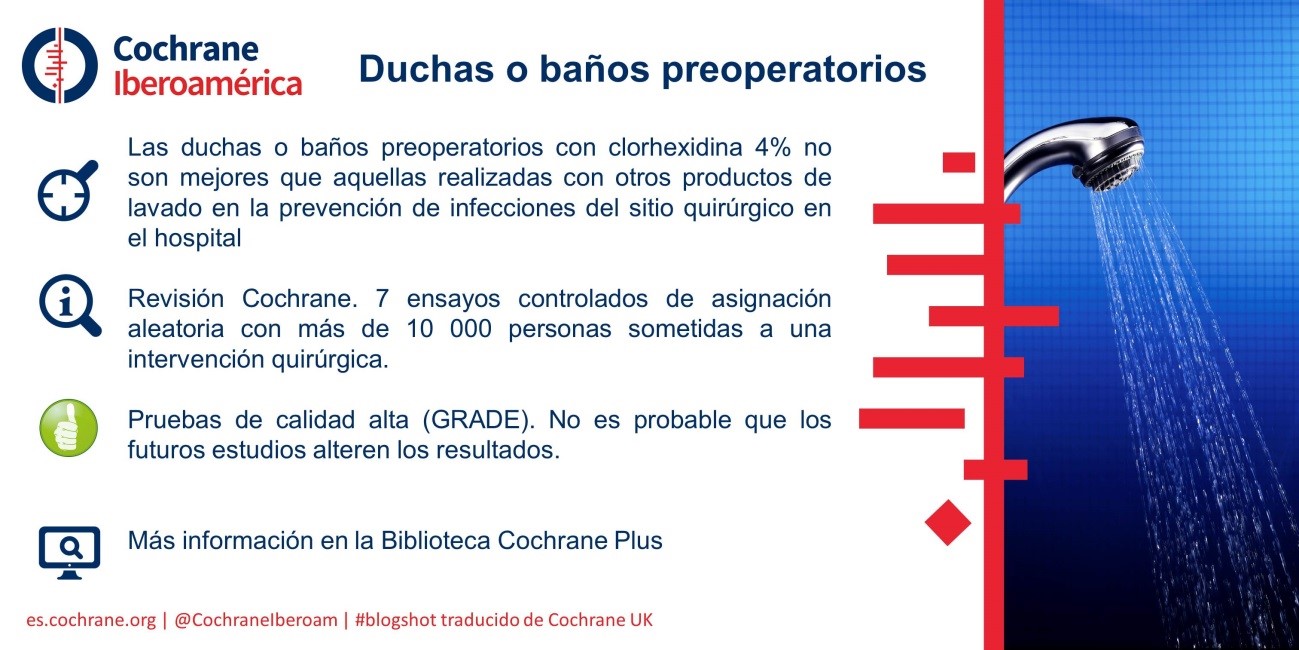 When you’re happy with your blogshots, you just need to save it as an image (jpg, png, etc.) and decide where you are going to post it. I normally post it on the Cochrane Iberoamerica website under Resources together with the link to the review in Spanish published in the Biblioteca Cochrane Plus and disseminate it through our social media networks. One piece of advice: I recommend posting blogshots as images and not links – both on Facebook and Twitter – since this way the picture is larger and more noticeable. At this point, you can sit back and relax, and wait for the likes and retweets to roll in.

In conclusion, our experience with blogshots has been highly positive and their impact on social media undeniable.  My suspicions were confirmed when I observed that our Facebook fans almost doubled in the first two months.  In fact, our most successful Facebook post was “Cuándo reemplazar el catéter venoso http://ow.ly/Xv6Vb” [when to replace a peripheral venous catheter]. It reached over 8,800 people and achieved 142 reactions, comments, and shares.

Our Twitter results are equally satisfactory: our Twitter followers haven’t stopped growing ever since we posted our first blogshot on December 2015 and the tweet with the most interactions also corresponded to a blogshot: “AINE tópico: buena alternativa al fármaco oral para el dolor musculoesquelético http://ow.ly/XDr4Q  pic.twitter.com/q5r3R401SB” [Topical NSAIDs: a good alternative to oral drugs for musculoskeletal pain], with over 350 interactions.