Creating a successful online animation resource: the ‘what are systematic reviews?’ video

It’s been a year since the ‘What are systematic reviews’ video was published on Cochrane.org. It was prepared by the Cochrane Consumers and Communication, La Trobe University and generously support by Cochrane Australia. The video has 28 thousand views and counting and the resources have been included in Wikipedia.  Jack Nunn from Cochrane Consumer and Communication shares why they made the video and what lessons the Cochrane Community can take from their experience.

Identifying a need
Cochrane’s Strategy to 2020 aims to make Cochrane the ‘home of evidence’, and to make evidence ‘accessible to everybody, everywhere in the world’. This aligns nicely with the Cochrane Consumers and Communication Group as our goal is to increase public understanding of research and the role evidence plays in informing policy and practice.

Involvement of users
Working with members of the public and partner organisations, Sophie Hill and I identified a need for learning resources to help people understand Cochrane systematic reviews and the wider importance of that work. We involved people at every stage of creating and evaluating a video and resources (at events and online). To increase the impact of the resources, it was agreed they should be:

Creating the resources
We worked with a professional animator who helped interpret our script and ideas for visual explanations which they put it into a clear and simple visual language. We aimed to explain:

We also worked with a professional voice-over artist – and there was some discussion about whether the accent should be ‘British’ or Australian – as we genuinely got feedback from British users complaining about the pronunciation of ‘data’! We carried out quite a bit of user testing which was very helpful in making sure that people understood the key concepts.

In addition to the video – we also created a number of animated GIFs and combined them with the script to create an ‘animated storyboard’. Videos are great for some people, but people with different access needs or people who use certain platforms (some smartphones) can’t use embedded video – so this was an attempt to be more accessible.

Results
We produced a video and published it on several Cochrane sites, including the Cochrane YouTube channel. We also published our animated storyboard on our website and made all the resources downloadable on the Internet Archive, as YouTube is blocked in China and other countries.

All resources were licensed under Creative Commons which means people are free to use and adapt them in any way they felt helpful. This is a great way of boosting impact.

Success!
This video was published on the Cochrane YouTube channel and published on Cochrane.org and other Cochrane sites. It’s been shared on social media widely and currently has 28,000 views with the number growing each month. The resources were also included on Wikipedia.

We presented a poster about the work at the Cochrane Colloquium, which you can read here. 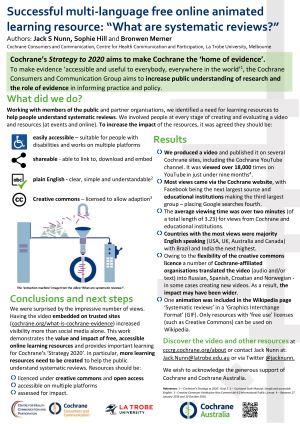 What the Cochrane Community can learn from this:

Overall, we found the experience of making these resources very rewarding. I’ve created a few learning resources in my time, but we never dreamed that these would be so popular. It’s a fantastic feeling that we’ve helped so many people understand the importance of Cochrane’s work and the wider implications of evidence.