Looking forward after the 24th Colloquium: A message from Cochrane's CEO 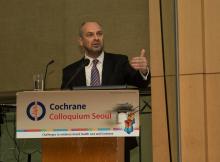 Cochrane CEO Mark Wilson, provides a recap of events from the Colloquium and what we have to look forward to.

It’s three weeks since the close of our 2016 Cochrane Colloquium held in the vibrant city of Seoul, South Korea, and therefore a good time to draw breath after the frenetic activity that took place there to assess the initial feedback we’ve received from participants, review its major outcomes, celebrate achievements, and identify the challenges that still lie ahead.

The extensive post-Colloquium survey feedback reflects my own view: that the Seoul Colloquium was an outstanding success! It was the first to be held in East Asia, and of the over 800 participants who attended almost half came from that region. This gave the Colloquium a unique atmosphere and represented the successful opening up of Cochrane to new local audiences in East Asia, a key reason for having a peripatetic annual organizational and scientific gathering. Attendees were able to choose from four plenaries addressing global health priorities and how Cochrane should respond to them, 96 workshops, 151 oral presentations and almost 200 posters, with the survey feedback showing enormous appreciation for the range and quality of all of them. In fact, the biggest complaint was that there were too many attractive and compelling sessions to choose from! An offical Colloquium report with the survey feedback will be shared with the community in December.

The emergent theme underlying all of these events became: ‘Change is happening’ in Cochrane (with thanks to the excellent blog post from the Evidence Synthesis team at Exeter University for the phrase). Collaborators from all parts of the Cochrane world could see the changes driven by our Strategy to 2020 arriving in many different and exciting ways; and I think the Colloquium marked a watershed moment as a new level of engagement and support from the Cochrane community for these changes emerged. Many of you were impressed and excited by the Special Session at the Annual General Meeting (AGM), where different members of the community had the opportunity to share their stories of responding to the challenges of the Strategy. As well as live presentations from a selection of Cochrane Groups from around the world, the session included a fantastic video highlighting just a few stories and accomplishments of what Strategy to 2020 means to Cochrane Groups, and their work within local contexts.

The Colloquium also saw important decisions being taken. At the AGM, members agreed to the proposed governance reforms formalized in Cochrane’s new Articles of Association that were widely consulted on over the past year. The Steering Group has now been replaced by a Governing Board, which will include both internal and external members. And critically, the approved changes move Cochrane from a membership model based on Groups to individual membership, enfranchising thousands more people to vote both for candidates for the Board and on our organizational policies and governance. Elections for four new internal members will take place in the coming months. We want to promote a new generation of Cochrane leaders to emerge through this process and therefore encourage all of you who are interested to consider putting yourself forward as a candidate for the new Board at such a tremendously exciting time.

In addition, a new Cochrane Council will be established in the next six months with representatives initially drawn from the existing Cochrane Group types and the Author Forum. The Council will provide a forum for Groups to meet and discuss high level matters with each other, and to make sure that the voice of Cochrane’s Groups is heard by the Board. Each of the Cochrane Group Boards/Executives agreed election or nomination mechanisms for them to decide their first representatives to the Council.

The Steering Group also approved, and the respective Cochrane Group Boards endorsed, hugely significant organizational structure and function changes. The CRG transformation programme was approved in its entirety and Editor in Chief David Tovey and his team, assisted by a new CSG-appointed support group, will begin implementation immediately. The Centre Directors Board endorsed the new proposals related to geographic-oriented Groups, as well as a new ‘Collaboration Agreement’ text that establishes mutual responsibilities and accountabilities between the Centres and the Central Executive. You can read more about these changes on the Structure & Function section of the Cochrane Community site; and by the end of the year a Centres portal will be created providing a permanent home for all Centre-based resources.

My grateful thanks to Professors Hyeong Sik Ahn and Hyun Jung Kim, and the whole Cochrane Korea team, for all their work in hosting such a successful event. Thanks also to Cochrane Australia for the support it provided, and to all those who ran workshops, held meetings, and contributed in many other ways whether they attended the meeting in person or not. A Colloquium is always a powerful and positive reminder that Cochrane’s success is based on the multitude of contributions by its global network of collaborators. In the second of my presentations at the AGM, I stressed that achieving Strategy to 2020 requires us to build an organization that attracts and retains the best people, lives its values and can sustain its activities – and to do that we must forge a new kind of collaboration drawing on Cochrane’s heritage and experience of working together. To succeed over the next two decades Cochrane needs to become an organisation which is more collaborative: and collaborates in different, wider, deeper ways. This is a challenge, but the Seoul Colloquium showed us all that it is already beginning to happen.

With my very best wishes,