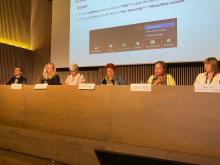 Cochrane holds a public Annual General Meeting (AGM) once a year as part of its legal duties as a charity The AGM provides an opportunity for Cochrane's Trustees - its Governing Board - and senior officers to tell you about the management, finances, and strategic priorities of the organization.

Thank you to everyone who joined us for Cochrane’s 2022 Annual General Meeting 17 October 2022, a hybrid meeting with most of the 200+ attendees joining virtually and some attending in-person at the Cochrane Iberoamérica Network meeting in Barcelona, Spain.

We invite you to watch the meeting in full or skip to the parts of interest.

00:00 Welcome and introductions
05:38 Report from the Co - Chairs of the Governing Board, Catherine Marshall and Tracey Howe (Slide Deck)
15:45 Report from the Treasurer, Karen Kelly (Slide Deck)
23:00 Voting on proposed Resolutions (All resolutions and record of votes)
25:03 Report from the Co-Chairs of the Cochrane Council, Robert Dellavalle and Stefani Negrini (Slide Deck)
30:16 Report from the Chief Executive Officer, Catherine Spencer (Slide Deck)
38:50 Report from the Editor in Chief of The Cochrane Library, Karla Soares-Weiser (Slide Deck)
52:17 Awards and Prizes
53:10 The Kenneth Warren Prize is awarded to a developing country principal author of a Cochrane Review of high methodological quality and relevant to health problems in developing countries. (Read more about the prize winner here)
56:03 The Anne Anderson Award is awarded at each Cochrane Colloquium to a female member of Cochrane who has made a significant contribution to the enhancement and visibility of women's participation within Cochrane. (Read more about the award winner here)
1:00:43 The Chris Silagy Prize is awarded to an individual who has made an "extraordinary" contribution to the work of Cochrane which would not be recognised outside the scope of this prize. (Read more about the prize winner here)
1:03:35 The Bill Silverman Prize is awarded to acknowledge explicitly the value of criticism of Cochrane, with a view to helping to improve its work. No prize was awarded in 2022.
1:05:21 Question period and discussion
1:20:58 Approval of proposed resolutions
1:21:38 Closing remarks

Prior AGM agendas and minutes can be viewed here. If you have any questions following reviewing AGM content, please email agm@cochrane.org