Cochrane is a global network of approximately 80,000 people1 from more than 130 countries who contribute to, or support, the organization’s work. Except for staff of the Central Executive Team2, Cochrane does not directly employ its contributors. These contributors are split into three categories:

Membership is open to anyone3 who contributes in a sustained and substantive way to Cochrane’s work, and members come from a variety of different backgrounds. An individual’s membership journey usually begins as a supporter upon activating a Cochrane Account. Supporters graduate to member status based on the tasks they complete.

Cochrane Groups are independently funded and supported by non-commercial entities, like universities, hospitals, government funding agencies and charities, which provide funding directly to the host organization of that Group to support Cochrane’s work in a thematic or geographic area. Cochrane Group Staff are usually employed by the organization hosting their Cochrane Group.

Most members and supporters make their contributions to Cochrane through at least one Cochrane Group (e.g., as a member of a Cochrane Review author team working in a Review Group or a translator in a Geographic Group), but increasingly there are others who contribute outside of the Group structure, e.g. through Cochrane Crowd. Many members and supporters have their own source of funding to undertake Cochrane work (e.g. research grant funding to undertake a Cochrane Review) and others contribute on a purely voluntary basis.

Despite this diverse, networked structure, Cochrane has clear policies, processes and management structures in place to ensure the accountability of all those doing work in its name, which are set out below.

1Numbers are correct as of June 2019 but are growing daily
2Central Executive Team staff are employed by Cochrane’s UK Charity
3Members cannot work for a pharmaceutical or medical device company, for conflict of interest reasons.

Being accountable means making a commitment to be responsible and answerable for your actions, and wherever possible, doing the things you make a commitment to do. In Cochrane, accountability applies at a personal and organizational level. Members and supporters make a commitment to treat each other with respect and fairness in carrying out work for Cochrane. Management and governance decision-making are transparent and explainable. Constructive criticism and debate are welcomed.
Cochrane sets out its definition of accountability in its Principles and official Policies:

These principles and policies set out clear expectations of behaviour and practice. They support members and supporters in working together individually and collectively to achieve the organization’s goals and objectives.

Nevertheless, sometimes problems and disputes between people doing their Cochrane work will occur. To resolve these issues Cochrane expects that in the first instance they should be dealt with directly between the parties involved, and at the most local level possible thereafter (i.e., by those who supervise or manage the Cochrane work of those involved). This recognizes that the earlier and more directly an issue or problem is raised, the greater the chance of successfully resolving it. If an issue cannot be resolved by the individuals involved, or those supervising or managing their Cochrane work, then a complaint can be made by any Cochrane member or supporter, which will be handled according to the organization’s Complaints Resolution Procedure.

i. Through Cochrane’s organizational and governance structures

Cochrane’s highest body of organizational and governance authority is its Governing Board, made up of elected and appointed Trustees and Directors of The Cochrane Collaboration (a UK charity and limited-liability company). In turn, the Trustees are responsible to the UK’s Charity Commission and Companies House for all of Cochrane’s activities and to ensure that those activities are conducted properly and lawfully; and contribute towards its mission and public benefit obligations.

The Governing Board delegates its authority for organizational management and executive delivery of Cochrane’s strategic goals and objectives to the Chief Executive Officer, and authority for Cochrane’s editorial content to the Editor in Chief. These executive officers are responsible to the Governing Board for the performance of their duties; and they are supported by a Senior Management Team and a Central Executive Team.

Cochrane’s Review Group Networks, individual Review Groups, Geographic Groups and Networks, Methods Groups and Fields are accountable to the Editor in Chief and CEO through their integration within an organizational structure (see section iii. below). These Groups4 have  established the details of their mutual responsibilities and accountabilities through individual Collaboration Agreements with the Central Executive Team, or in the case of some Geographic Groups, with a Cochrane Centre.

More details on this structure of organizational accountability can be found here.

4Or will soon (in the case of Fields and Methods Groups). 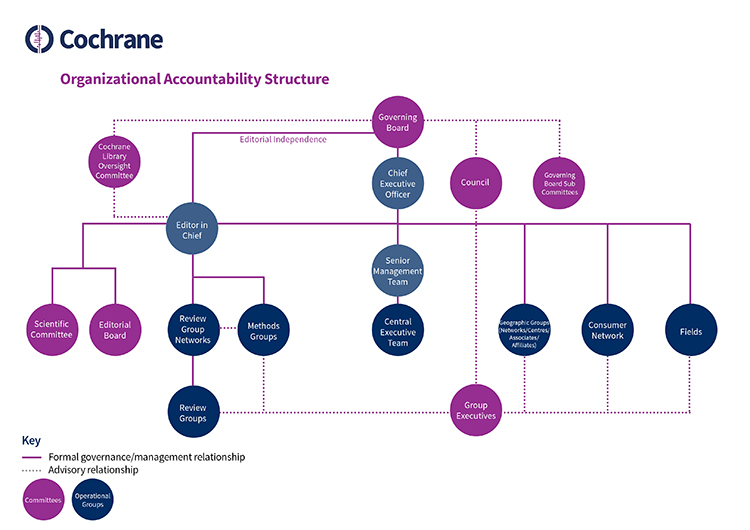 Cochrane uses strategic planning to set clear organizational priorities, focus core resources, and ensure that staff and members are working toward common goals in support of its mission. Cochrane’s current strategic plan is the Strategy to 2020, a seven-year transformational programme developed through a consultative process with Cochrane members, staff and external stakeholders, that has introduced four key goals for the organization under which all activities are now based:

GOAL 3: Advocating for evidence
To make Cochrane the ‘home of evidence' to inform health decision making, build greater recognition of our work, and become the leading advocate for evidence-informed health care.

GOAL 4: Building an effective sustainable organization
To be a diverse, inclusive, and transparent international organization that effectively harnesses the enthusiasm and skills of our contributors, is guided by our principles, governed accountably, managed efficiently, and makes optimal use of its resources.

Cochrane’s Senior Management Team proposes annual targets for delivery by staff and members in support of Strategy to 2020 that are considered, amended and approved by the Governing Board. The annual budget for core funds is designed to deliver the targets and other key organizational priorities in any given year. The Central Executive Team works with Cochrane Group staff and members to communicate, plan and deliver the targets through workplans and projects. All documentation related to strategic plans is published and regularly updated on the Cochrane Community website, and discussed and communicated across Cochrane’s global network in multiple ways: for example, at meetings such as the Governance Meetings and Colloquia, online, and through training events.

In Cochrane, ‘managers’ are those individuals within a Cochrane Group or Central Executive Team department responsible for supervising the people doing Cochrane work for their Group or department. Except for staff of the Central Executive Team, Cochrane does not directly employ its contributors. Therefore, although in the context of their employment or other activities a person may have a different line manager, for their Cochrane activities the management accountabilities listed below apply.

All members and supporters report to the Cochrane manager for the area of work or task they are doing for Cochrane. Equally, that person is accountable to them for leadership, guidance and support - in accordance with Cochrane’s Charter of Good Management Practice. A member or supporter may have multiple, different accountabilities depending on the tasks they are doing for different Groups. In other words, ‘line management’ is task specific, just like overall membership structure.

* Delegated responsibility to the Deputy Editor in Chief

** Delegated responsibility through to the Deputy Editor in Chief

**** Delegated responsibility through the Head of Knowledge Translation