Anne Anderson Prize: recognizing the enhancement and visibility of women in Cochrane 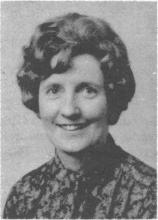 The Anne Anderson Award recognizes a female member of Cochrane who has made a significant contribution to the enhancement and visibility of women's participation within Cochrane.

Who was Anne Anderson?
Anne Anderson was a contributor to the stream of thinking and effort that gave birth to evidence-based health care. A clinically qualified reproductive physiologist, Anne had an active interest in women’s health, co-editing the first edition of Women’s Problems in General Practice with Ann McPherson and contributed to Effectiveness and Satisfaction in Antenatal Care (1982), edited by Murray Enkin and Iain Chalmers. She was discussing with Marc Keirse and Iain Chalmers the possibility of co-editing a companion volume on elective birth, however her premature death from breast cancer in 1983 ended her involvement. Anne Anderson was 46 years old when she died. Iain Chalmers, Murray Enkin and Marc Keirse went on to publish Effective Care in Pregnancy and Childbirth (ECPC) in 1989, dedicating the book in part to Anne. ECPC, through its systematic approach to assessing the research literature, is widely acknowledged to have led to development of Cochrane (more about Anne Anderson: Wikipedia).

Who are some of the past recipients?

What are the judges looking for?
Recipients will be selected based on emotional and cognitive intelligence, serving as an inspiration to others, evidence of cumulative accomplishment, originality and independence of thought, personal qualities, team building, leadership and mentorship. The nominee’s contribution to or enhancement of women’s visibility within Cochrane, participation in Cochrane and other leadership, and other accomplishments within the context of Cochrane will also be considered in the selection process.

What are the prize recipients awarded?
The Award recipient will be announced at the Colloquium and receives a plaque from Cochrane honouring her contributions. She then designates the cash award of 3000 USD to assist a woman from a low-resource setting with her Cochrane activities, who should eventually provide a brief written report on how the funds have been used.

How does the nomination process work?
Anyone in Cochrane can nominate a past or current active women member of Cochrane. It’s a simple survey giving examples of their contribution and how they fit the criteria.


This award is just one of Anne Anderson’s legacies and the award recipient each year leaves her legacy by assisting a woman from a low-resource setting to assist with her Cochrane activities. Your nomination can have a ripple effect! We welcome you to nominate a woman in Cochrane who inspires you, especially the quiet achievers who might otherwise not be recognized!

Find out more about what impact receiving the award money has: