What is a living systematic review?

We define an LSR as a systematic review which is continually updated, incorporating relevant new evidence as it becomes available.

Practically, this means that LSRs:

While core review methods are not fundamentally different to other Cochrane Reviews, an LSR should additionally include explicit, transparent and predefined decisions on:

Living systematic reviews (LSRs) provide a new approach to support the ongoing efforts of Cochrane and others to produce evidence that is both trustworthy and current.

The concept of living evidence synthesis and related outputs, such as living guidelines, are of increasing interest to evidence producers, decision makers, guideline developers, funders and publishers, as a way to seamlessly connect evidence and practice.

The possibility of a scaled-up living evidence approach has only recently been within reach, due to a number of technological and data-related innovations, such as online platforms, linked data, and machine learning. Concurrently, research groups are embracing larger collaborations, open and shared data, and the growth of the citizen science movement, opening up the possibility of communities with a common interest maintaining high value datasets and associated LSR.

Cochrane authors and review groups planning to undertake a living systematic review are encouraged to contact the Cochrane LSR team at lsr@cochrane.org for support with developing their protocol. We're here to help you work through the factors to consider when planning and conducting an LSR.

Project Transform evaluated LSRs as part of the Production Models component with the following groups:

An evaluation was undertaken alongside the pilots to understand the feasibility of LSRs, implications for the people and processes involved and identify opportunities to refine the LSR model before scaling up. The final evaluation report is available to download here.

Following completion of the pilot, additional Cochrane teams are conducting LSRs, with the aim of at least one published LSR for each Network.

LSR guidance for production and publication

The purpose of this document is to outline the methods related to production and publication for LSRs published on The Cochrane Library. This document is primarily designed to be a practical guidance document for the authors, Review Groups and Central Editorial Unit staff involved in Cochrane LSRs. The approach described is the revised guidance based on our review of current literature relevant to LSRs and consultation with a range of stakeholders, including the LSR Network, which includes members within Cochrane and beyond.

The Living Evidence Network is an informal network that was launched in February 2016, with members including Cochrane and non-Cochrane researchers, policymakers and guideline developers.

The Living Evidence Network aims to: 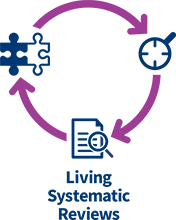